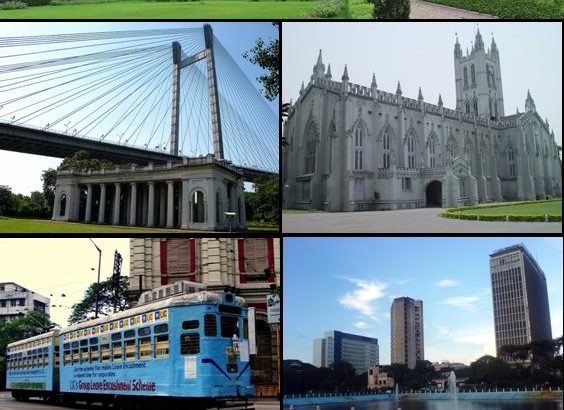 The great big, white marble building that stands in the heart of the city is the brainchild of George Curzon, Viceroy of India. It is a vital part of Kolkata tourism. The memorial was built to commemorate Queen Victoria in between the years of 1906 to 1921. It has now been transformed into a beautiful museum that houses a remarkable collection of ancient artefacts in its 25 stunning galleries. One of the most popular tourist spots in Kolkata, Victoria Memorial receives visitors from all over the globe. The architectural wonder is built in Indo-Saracenic revivalist style with a blend of British architecture and methods borrowed from various parts of the world such as Egyptian, Mughal, Venetian, Islamic, and Deccani.KOLKATA-THE CITY OF JOY

The fourth busiest Cantilever bridge in the world – Howrah Bridge is probably the first suggestion you will get when you ask about the best places to visit in Kolkata. The celebrated landmark built upon River Hooghly acts as a gateway to Kolkata and connects the eastern Bank of Howrah to the western banks of Kolkata. The construction of this architecturally brilliant bridge was initiated in 1939 and the bridge was renamed as Rabindra Setu to honour the Nobel laureate Rabindranath Tagore in 1965. About 90,000 vehicles and hundreds of pedestrians travel on this bridge every day.

Park Street – “The Street that never sleeps” has been the seal of Kolkata’s vibrant night life since the 40s. Many popular musicians, artists and writers walked around, wrote, sang, and played in the long-standing, popular night spots that still have the power to light up the creativity in any artist that walks into them. With plenty of restaurants and pubs, the Park Street has forever remained Kolkata’s favorite hangout spot and an integral part of Kolkata tourism. The historical street houses some ancient monuments and buildings from the British era that add to the culture of this unique street. The street has now been officially renamed as Mother Teresa Sarani and was earlier called as the Burial Ground Road.

Another popular tourist spot in Kolkata, the South Park Street Cemetery is unlike any other place in the city. Well-known as one of the earliest non-church cemeteries in the world, it is located on the popular and busy Park Street. The heritage site that’s protected under the Archaeological Survey of India (ASI) is the resting place of many notable personalities. Constructed with a mix of Gothic and Indo-Saracenic style of architecture, the memorials are constructed with a classic taste and peppered with tombs and sculptures. Even though visiting a cemetery on a trip isn’t for everyone, it is a perfect spot for those who poetically look for beauty in death.

Dakshineswar Temple – The temple of the goddess who is believed “to liberate her devotees from the ocean of existence” – Bhavatarini, a manifestation of goddess Kali, was constructed by a philanthropist called Rani Rashmoni in 1855. The beautiful temple complex built in the classic ‘Nava-ratna’ style of Bengali architecture is a popular pilgrimage spot for Hindu devotees. The temple that stands on the calm eastern bank of the Hooghly River was once a residing place of the Hindu mystic – Ramakrishna Paramahansa. It is among one of the most famous temples in Kolkata.